The Dance-Off is an option that can be chosen in the Master Bounty Hunter path. It is represented by the upper half of someone doing a dance where that person bobs his head forwards and pulls his arms back and then vice versa in two loops of the pattern.

As a running gag, the option is available in every choice screen throughout this path, but it always results in a fail where Henry Stickmin gets killed before he can commence the dance-off. It would probably fail anyway due to no progress being made in the level.

The fail screen also gets increasingly more annoyed as the player keeps trying to use the dance-off.

Henry's face is punched by the Right Hand Man before he can start the dance-off. This is the only instance where Henry is not shot but rather punched.

Henry being crushed by a tank 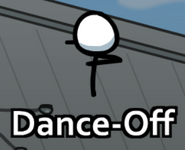