View source
If you were looking for the article about the option, then see Dave (option).

Dave Panpa is a major character in the Henry Stickmin series. He is a former member of the Police, who later got fired and became a security guard at the National Museum of History and Culture.

He is also a catalyst of the series, as he was the one who brought the package sent by Ellias Bahtchin to Henry without thinking it through.

Dave is eager to do the best job he possibly can, but being rather negligent, his efforts often backfire. He was fired from his job as a police officer and had to move to be a security guard. Later on, he was imprisoned by the Toppat Clan.

He was a police officer and the final antagonist of Breaking the Bank, and one of the two central antagonists in Escaping the Prison, but later appeared as a security guard and a supporting antagonist in Stealing the Diamond due to getting fired as a result of Henry's escape. He's a prisoner of the Toppats and a recurring minor character in Infiltrating the Airship and a major character in Completing the Mission.

At some point prior to Henry's arrest after his failure to rob the bank, Dave was newly hired as a police officer at the West Mesa Penitentiary. One of his most important jobs was to check packages that were delivered to the prisoners for anything important. He was eager to do his best job while on the force. He was partnered up with Rupert Price, another officer at the penitentiary.

Dave only appears in the credits of the legacy version of Breaking the Bank, where he is the police officer seen pushing Henry into his cell after his arrest. This scene, along with the entire credit sequence, was removed in the remastered version of the game.

After Henry's arrest, a mysterious package interdimensionally appeared out of nowhere at the prison (due to Ellias Bahtchin fixing the multiverse anomaly a year later). Dave found the box and told Rupert it was for Henry. His job was to check the package for anything useful, though he neglected his duties. Dave went upstairs with Rupert to Henry's cell to give him the package. Rupert, standing next to Dave, told Henry he was "free to go". After Henry became excited, Rupert laughed and said, "Not really. But you got a package." Rupert kicked the package into Henry's cell, and he told Henry not to get his hopes up about what was inside it because Dave already checked it for anything he could use, to which Dave confirms rather nervously. The cake inside the package did in fact contain several useful items that Henry used to escape.

These are the variations of the situation that Dave is in, depending on what the player makes Henry do.

After Henry's escape from West Mesa, the officers at the prison realized there was a cake inside Henry's mysterious package, with something in it that allowed Henry to escape (either the file, the drill or the cellphone). As a result, Dave was fired for negligence.

Dave later worked as a Security Guard for the town museum, not realizing that, unluckily, that is where Henry went next.

When Dave was hired, he was partnered up with Kurt Dietrich. Kurt was rather unhappy as he already hated the job and had to endure all the nonsense from Dave. They guard the WWII section of the museum.

In the night that Henry infiltrated the museum, Dave decided to ramble again, with Kurt attempting to ignore his entire speech.

If Henry chooses to sneak in with a pick (Just Plain Epic route), he will overhear the conversation, where Dave said, "Yeah, so apparently, there was something in that cake, and he used it to escape, and then I got fired. Pretty lame huh?" An angry Kurt then demands Dave to stop.

Dave somehow got captured by the Toppat Clan, an organization of criminals. They then took him into their Airship and locked him into a cell next to the vault area. A key that opens his cell was left next to the Toppat computer.

During the "Pure Blooded Thief" pathway, Henry has the option to pick it up. If he does, he then frees him. Dave flees and manages to get inside the vault. He falls from the ceiling, but survives and runs away, dropping a flashdrive that is important to the Biggol Sword achievement.

If Henry never frees Dave, then uses the Power Glove, Dave will laugh at him before the fail screen shows up.

The airship later crashes because Henry stole the Romanian Ruby from the vault. This leads to huge chaos in which many Toppat members and (possibly) prisoners are killed.

In any other ending, Dave remains locked in his cell, and his ultimate fate is unknown, but PuffballsUnited confirmed that Dave lived.

In the "TCW" route, Dave is a semi-major character. He is still locked in his cell (as it continues from "Rapidly Promoted Executive").

When Henry's leadership is denounced for abandoning Ellie Rose in The Wall, Geoffrey Plumb and Thomas Chestershire, the only Toppats that still support Henry, are locked up in the brig along with Dave. Once Henry makes his way to the brig, he asks Dave to help him overpower Floyd Winters. While Dave is easily defeated, he buys Henry enough time to knock out Floyd. Dave then reluctantly joins Henry's faction of the Toppat clan and they escape into the desert.

Dave's bio in Escaping the Prison

Dave's bio in Stealing the Diamond

Dave's bio in Infiltrating the Airship

Dave's bio in Completing the Mission

In BtB (Flash version only) 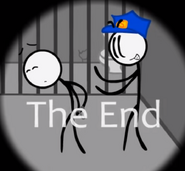 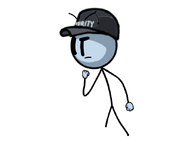 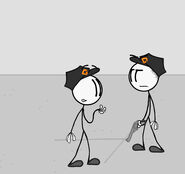 Dave explaining to Kurt Dietrich how he lost his job. 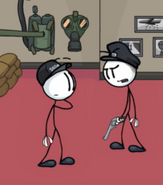 Dave Panpa knocked out after hitting a pillar 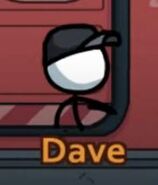 Dave teaming up with Henry, Geoffrey, and Thomas

Dave in the escape pod with Thomas Chestershire, Geoffrey Plumb and Henry

Stranded in the desert 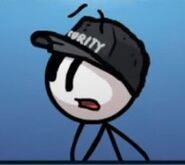 Dave at the end of Toppat Civil Warfare

Close up of Dave in the desert

Watches Henry at gunpoint in the Mind Crystal fail