Distract (colloquially known as the Distraction Dance) is an option in Fleeing the Complex, appearing in the Convict Allies route. It is available to the player when Henry Stickmin, upon climbing the vent with Ellie Rose, reaches the storage room where they have to get past guards Isaac Binderson and Heath Stone.

If the option is selected, Henry begins dancing while the track "Dance Mr. Funnybones" plays, disrupting the guards' conversation. Initially hostile, Isaac becomes amused and quickly joins in on the act, followed by Heath. Ellie then also joins. The convicts are too engaged to even escape, leading to a fail. 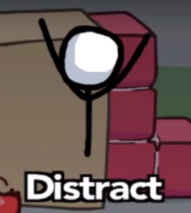