Prisoner at The Wall

Ellie is a major character in Fleeing the Complex and is confirmed to appear in Completing the Mission. She is the first primary female character in the Henry Stickmin series.

In the events before Fleeing the Complex, Ellie ended up in The Wall, the world's biggest prison complex full of notorious criminals. She then helps Henry escape imprisonment in the Convict Allies and Ghost Inmate ending.

What she did to warrant her imprisonment is unknown.

She is first seen at the start of the game, sitting on the floor in the same cell as Henry and she looks very sad, waiting for transfer to their new cells. Gregory, Dmitri Petrov's right hand, who was supposed to guard them, turns around. After that, Henry sees his chance to escape, and he can ask her help to reach a hatch in the ceiling in order to escape. When this is done, he has to choose whether to take her along or not.

If he chooses to take Ellie along, she and Henry will team up to flee the complex. They crawl out of the vent and synchronize a take-down of the two guards blocking the door. When they reach the security office, Ellie uses the force to lift Henry on the ceiling so he can access the office through a hatch and open the door for her. However, Henry also opens the doors of all the other cells, starting a prison break. Eventually they end up cornered by three armed guards, she uses a taser to shock Henry, who then quickly shoots them with a Sniper Rifle. Then she takes two of their hats and uses them to distract two more guards out of an elevator. They go in it, and they make their way to the Yard.

In the Yard, Gregory, who lost them out of his sight and caused the breakout, catches Ellie and holds her hostage, but Henry saves her, making a face which distracts Gregory who then gets hit by a stolen truck. He then hitches a ride on a motorcycle, but is tackled by Dmitri, the warden of The Wall. Ellie then jumps on the motorcycle and rides off to somewhere where she takes a metal stop sign. She rides the motorcycle to Henry, hits Dmitri with the sign, and saves Henry. Henry climbs on the motorcycle along with her and they ride away together, which results in the Convict Allies ending.

If Henry chooses not to return and help Ellie after reaching the hatch, she remains behind in prison. She is obviously disappointed, and a remark states that she will remember this. This is a reference to games developed by the now-defunct studio Telltale.

Ellie is confirmed to appear in Completing the Mission[1]. It is currently unknown what her role will be.

Ellie in the transfer cell with Henry.

Use the Force Ellie!

Ellie and Henry teaming up against guards.

Ellie taken captive by Gregory in the Yard.

Ellie saves Henry by knocking out Dmitri Petrov with a stop sign.

Henry and Ellie escape the prison. 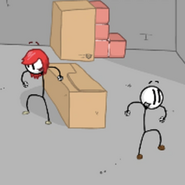 Let's have a dance, shall we? 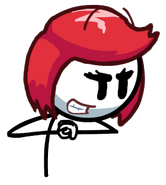 Ellie's appearance in Completing the Mission

On art by Puffballs United
Add a photo to this gallery