Escaping the Prison is the second game in the Henry Stickmin series. It is the sequel to Breaking the Bank, and the prequel to Stealing the Diamond, and is named as Episode 1 of the Henry Stickmin story. It is one of the most popular of the series, with over 3 million plays on Newgrounds. It contains a total of 36 choices to make, which is 6 times the amount as the previous game.

In the Henry Stickmin Collection, a secret ending called Multiverse Correction (which requires all fails and endings in all the games) proves that the Center for Chaos Containment spawned the box containing all the tools (or just one, depending upon the player's choice) Henry can use to escape to kick off all the multiverses.

Following the events of Breaking the Bank, Henry Stickmin is now imprisoned inside the West Mesa Penitentiary. Police officers Dave Panpa & Rupert Price brought a package addressed for Henry to his cell, and delivers it to him.

Rupert taunts Henry by claiming that the package contains no such object that would allow the prisoner to escape the building. He asks his friend, Dave, to confirm that the package has been checked. Dave presumably was to check the package, However, Dave begins to chuckle nervously, claiming that he did inspect the package for anything suspicious because he does not want to lose his job as an officer.

The two then leave Henry to his own business with the package. Inside the package is a cake, with multiple tools hidden inside. Henry reaches in to grab an object out.

Appearances in other games

In the remastered version, the following characters appear in the game:

Glitches (In The Legacy Version)

Escaping the Prison - All Choices

Escaping the Prison Remastered - All Choices, Fails & Endings
Add a photo to this gallery

The Main Page on Stickpage.com

Henry having the Rod

Lasers from Breaking the Bank (Legacy)

The NRG Effect on Henry

Henry collapsing from the Parachute.

The File being used on the door

Henry Attacking Rupert with the rod

Badass Bust Out Ending
Add a photo to this gallery 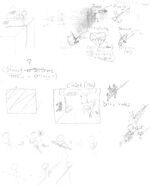 The third prototype sketch
Add a photo to this gallery

Retrieved from "https://henrystickmin.fandom.com/wiki/Escaping_the_Prison?oldid=190448"
Community content is available under CC-BY-SA unless otherwise noted.