Fleeing the Complex is the fifth game in the Henry Stickmin series.

It is the direct sequel to Infiltrating The Airship, and is named as Episode 4 of The Henry Stickmin Collection.

The game was created and released by PuffballsUnited on November 12th, 2015.

Henry has been captured and arrested again, and is brought to a prison/complex, known as The Wall, after the warden, Dmitri Johannes nods out about some old friends to help, noticeably the Toppat Clan and Charles Calvin, or make new friends, such as Ellie Rose, or free himself out on his own to make it out alive and be free from the wall.

At The Wall, a heavily-secured incarceration complex located in Canada, the Warden/CEO/co-founder of the complex, Dmitri Johannes Petrov, and his second-in-command Grigori Olyat, find a lengthy criminal record in their files belonging to Henry. Deeming him to be dangerous enough for incarceration at The Wall, the two decide to move in to capture Henry.

Henry wakes up at the complex where he finds Dmitri "welcoming" Henry Stickmin to his new home. The Warden states that only the most notorious criminals are held there. The warden taunts the prisoner by informing him that he would remain at The Wall for a long time, before ordering Grigori to send Henry to a transfer cell.

In the transfer cell, a woman by the name of Ellie Rose is also awaiting a transfer to her cell. With Grigori turned toward the hallway, Henry can plan his means of escape:

Fleeing the Complex is set in snowy mountains, where The Wall is located and Henry is imprisoned. The complex holds the 'world's most cunning and notorious criminals', as said by Dmitri Petrov in the intro of the game, and after that Henry was forced unconscious and sent to a transfer cell. It was confirmed it is located in Canada.

A new feature called Map is included in the game, making the navigation through fails easier and allowing the player to instantly revisit any choice screen from any of the 5 endings in the game. It is a replacement for the Step Back feature.

The game also introduces a timer for the Quick Time Events, indicating how long there is to select an item. Additionally, not all options are available at the start of the time-limited decisions, with some only selectable near the end of the countdown (ex. the final QTE in Presumed Dead ending).

Both of these features were retroactively added to the previous games for The Henry Stickmin Collection.

The original release of Fleeing the Complex had 18 achievements. The remastered version has 15.

In late 2014, PuffballsUnited revealed initials for the game (FtC) on his Twitter. In January 2015, a full title along with the opening scene was shown. In March, Puffballs revealed a summer release is a possible release date, but it was pushed to middle fall (November).

What happenes when you click "Play" before the game's official release. 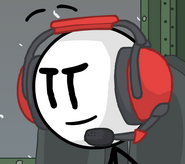 Fleeing the Complex - All Choices & Fails