Henry Stickmin Wiki
Register
Don't have an account?
Sign In
Advertisement
in: Antagonists, Characters, Completing the Mission Characters,
and 14 more

He is a member of the Toppat Clan that hopes of opening a worm farm someday and he's a friend of Harry Butts as stated by his bios in ItA and CtM.

In the remastered versions of the game, Floyd stands out due to his tangerine-orange top hat. His bios state it was the most stylish hat he could find when he joined the clan. In the original version of Infiltrating the Airship however, he wore a black hat.

In Infiltrating the Airship, he appears as a minor antagonist in "Government Supported Private Investigator".

In Completing the Mission, he appears as a major antagonist in "Toppat Civil Warfare" and as a minor character in "Toppat Recruits".

Floyd Winters is a Toppat who stands out due to his tangerine-orange top hat, which also has a pale-ish orange stripe. He also wears brown shoes. However in the legacy ItA, Floyd wore a black top hat.

In TCW, If Henry uses Toppy, Floyd will be controlled and would wear the same hat as him and wears brown shoes instead of orange.

Floyd can be seen during the "Government Supported Private Investigator" pathway, where he is in the boardroom of the Airship, discussing new weapons for the clan with other Toppats.

Floyd also makes an appearance at the end of "Rapidly Promoted Executive" in the same boardroom during a meeting with the new and former Toppat Leaders, respectively Henry and Reginald also in his same seat.

Floyd makes an appearance during the start of the denouncement ceremony where he, Reginald, Ellie Rose and a couple of other Toppats are stripping Henry from his position as leader and overthrowing him. When Thomas Chestershire and Geoffrey Plumb show support for Henry, Right Hand Man immediately commands for Floyd to take both of them and any other Toppat who shows support for Henry to the brig.

He is later seen guarding the brig of the Airship where Dave Panpa, Geoffrey Plumb, and Thomas Chestershire are imprisoned (The latter two for supporting Henry after Reginald tried to take back leadership of the Clan). Henry manages to accidentally knock out Winters with the use of his Helicopter Hat though Winters soon starts to gain consciousness prompting Stickmin to act quickly to the situation.

With Dave's help, Henry knocks out Floyd and takes his keys to free the other Toppats who were loyal to him.

Winters appears as a cameo during the end of this path where he and a group of Toppats attend Henry and Ellie's recruitment ceremony.

Floyd Winters in the Original Adobe Flash Infiltrating the Airship

Floyd in the Remastered Infiltrating the Airship

Floyd's view from the back (Legacy)

Floyd's view from the back, showing a stripe on the hat.

Floyd Winters in "Rapidly Promoted Executive" during the credits

Floyd Winters in "Toppat Recruits" during the credits

During the Toppy Option 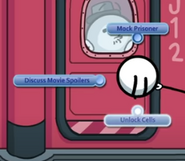 Floyd pointing his gun at Henry in the Mind Crystal fail

During the Mind Crystal Option

Floyd getting knocked out by Henry
Community content is available under CC-BY-SA unless otherwise noted.
Advertisement