Gastro is a toilet wizard, practitioner in the dark arts of Fecromancy, and a prisoner at The Wall.

A practitioner of the dark arts of Fecromancy.

Gastro is an old man who wears a cyan-ish light blue bath towel and has white shoes. Gastro also bears thick grey eyebrows and a long scraggly grey beard that seem to be thin.

However in Gastro's CtM wanted poster, his beard is shown to be more bushy and his eyebrows are even thicker.

He can be seen during "Convict Allies" escaping after Henry along with Ellie Rose accidentally open all the cell doors, releasing all The Wall prisoners. During his escape he can be seen practicing magic. His ultimate fate in this path is unknown as he is never seen after this.

He appears in endscreen of the "Master Bounty Hunter" route as a cameo and can be seen through a wanted poster showing that he is wanted by the Government.

Gastro on the endscreen of "Master Bounty Hunter." 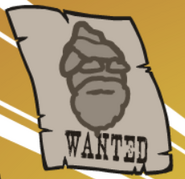 A closer looks of his Wanted Poster.

His appearance in FtC legacy.