Googuy is a member of the Toppat Clan and a minor character who appears in Infiltrating the Airship only during the "Pure Blooded Thief" route.

One awkward conversation about goo on your first day and that's all that you're known for?

He can be seen during the fight between the Military and the Toppats after Henry Stickmin causes the Airship to crash in the desert. Along with two other Toppats, Sammy Sorry and Quickdraw, he gets reduced to ash by Mert Steel when the Center for Chaos Containment decides to join the fight.

He wears some black shoes with a black, semi-tall top hat. 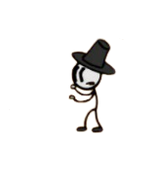 In the legacy version of ItA 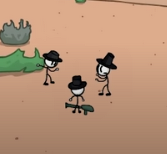 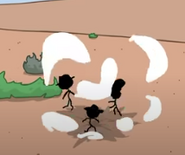