"Wings of the Pilot"

Government Supported Private Investigator is one of the four endings in Infiltrating the Airship.

In this ending, Henry teams up with Charles to steal sensitive, incriminating Toppat documents for the Government.

With a communications connection to Charles Calvin via Earpiece, Henry lands on the roof of the Airship. Locating a hatch, Charles informs Henry that there is a Toppat member, Hatchman, guarding the hatch from the inside. Henry must find a way to safely enter the airship from there.

Charles suggests fetching incriminating evidence to use against the Toppats in an effort to pin them to the charges against them. Stumbling upon a Toppat meeting in progress, Henry must find a way to pass by undetected.

No sooner has Henry crossed the room however, or he is force to dive into a trash chute since an elevator is about to open with the Toppat member Douglass Murl inside. Busting through the chute's vent, Henry lands on one end of a pit in the engine room. Charles informs Henry about the sign leading towards the "Records" room on the other side of the pit, and offers his assistance for Henry to cross it.

Arriving at the door leading towards the Records room, he finds a Toppat member, Wilhelm Krieghaus, there attempting to open the door as well. Charles tells Henry to leave this job to him.

Inside the Records room, Henry finds Handsome Harold, reading some documents detailing the history of their crimes. Determining that documents to be useful for the Government, Henry must find a way to steal them:

Henry seizes the evidence and begins to make his way out of the airship. Charles stops him, citing the amount of armed guards in the next room, and advises Henry to enter a nearby vent.

In the vent, he finds an electric defense system. Charles manages to hack into the ship's power grid, and asks Henry what he should do with it (with a Mass Effect-like conversation wheel showing up).

Henry exits the vent and encounters the storage area of the airship, finding two more Toppats, Benjamin Bourseious and Matthew Norbert. Being informed by Charles that he is right outside, Henry opens the bay doors, which alerts the Toppats. To assist Henry, Charles can use:

The Right Hand Man, alerted to the commotion in the storage, finds Henry with the evidence and the force gun. Before he can react properly, Henry knocks himself into Charles' helicopter with the force gun and they withdraw. Finding out that the Government was involved, the Right Hand Man expects trouble for the Toppat Clan.

Some time later, Henry is at home, and he tunes in to the news. A report reveals that Reginald Copperbottom and the Right Hand Man were arrested by the Government, along with hundreds of other Airship division members, were detained, and the airship was impounded. Many more were able to escape, although they are now pinned to criminal charges thanks to the evidence. Henry is presumably pardoned for his efforts in assisting the government. 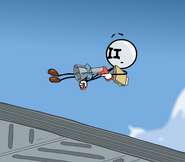 Henry jumping off the Airship with a Force Gun

An Unnamed Singer who was cut from the Remastered Version

The achievement earned by completing the route

The achievement earned by completing the route (Legacy) 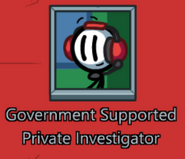