Executive Officer of The Wall

He is an employee/security officer of The Wall and the right-hand man to Dmitri Johannes Petrov.

He is shown to have an dark grey goatee and mustache and wears blue shoes. His choice of weapon is a Makarov.

However after getting hit by a truck, he comes back in Completing the Mission having a dark blue cast for his broken right hand.

Grigori is always serious, no matter what. He also seems to be very skilled, as he's getting brought in for the difficult jobs. Grigori stays loyal to Dmitri no matter what, being the only person that goes to the top of the Toppat Clan's rocket with him. Grigori is hard to anger, as in Completing the Mission, he's calm, compared to the visibly mad Dmitri, despite the fact that Grigori is more injured. Grigori is also very loyal to The Wall as a whole.

Prior to the events of Fleeing the Complex, Grigori approached The Wall’s warden Dmitri Johannes Petrov to discuss the acquisition of a new asset: Henry. Though Dmitri initially dismisses the request, he becomes interested the more Grigori reads off Henry’s past records, and decides to follow through with Henry’s capture.

After Henry is brought to The Wall and given an introduction from Dmitri, Grigori escorts Henry to the Transfer Cell, ordering him to stay put before guarding the door of the room.

In the Presumed Dead pathway, when the starting screen option to tackle him is chosen, Henry rams Grigori from behind with his head and starts running down the hall in his escape attempt, leaving Grigori lying unconscious against a concrete wall. He is never seen again for the rest of the pathway.

In the Convict Allies ending, Grigori appears in the yard just when Ellie Rose and Henry reach the surface during the massive prison outbreak. He takes Ellie captive, forcing Henry to act. To save her, Henry makes a face at Grigori, which distracts him long enough to get run over by a speeding Humvee that another inmate hijacked, severely injuring him and breaking his arm (as shown in Completing the Mission).

When Wait for Transfer is chosen in the start screen, beginning the International Rescue Operative/The Betrayed ending route, Grigori will bring Henry to his cell, sarcastically telling him to "have a good time". Grigori also appears in the Fake Illness option under the impression that Henry is sick and tranquilizes him only to then send him to the quarantine cell.

When choosing the option to Play Dead in the start screen, Grigori contacts Dmitri to tell him Henry has died. He is then instructed to "put Henry with [the] others", and thus tosses Henry's body out the window to his actual death.

Grigori appears again in Completing the Mission during the Toppat Recruits/Pardoned Pals pathways.

These pathways continue from where Convict Allies left off. Grigori has a broken arm in a cast as a result of being run over by a car in that pathway. He and his boss track down Henry and Ellie to the Toppat Launch Site, where The Toppat Raid has just begun, and attempt to recapture the two.

In the final choice screen, Henry and Ellie can surrender themselves to Grigori and Dmitri, which leads to a fail, or side with either the Toppats or the Government:

As Grigori is the right-hand man of Dmitri, he and Henry also despised each other. Grigori only wants to imprison or kill Henry, just like Dmitri does.

In the Toppat Recruits path, Grigori is shot to death by Henry and Ellie.

In the Pardoned Pals path, after Henry, Ellie and Charles destroy the Toppat's Orbital Station's support beams, which makes the Rocket and explode, killing Grigori on impact of the explosion (along with Dmitri, Reginald and Right Hand Man).

If Henry and Ellie choose to side with none of the three factions, Dmitri and Grigori are in the rocket when it launches and were probably killed by the Toppat Leaders afterwards.

Ellie shares the same hatred to him as Henry due to him wanting to imprison Henry and Ellie in The Wall forever.

Grigori and Dmitri are in very good terms with each other since Dmitri is his boss and gets brought onto the dangerous missions by him. 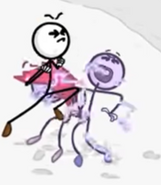 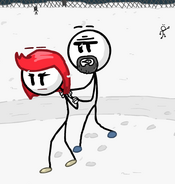 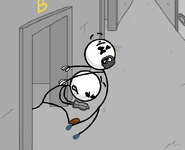 Grigori puts Henry in his cell.

Lying on the ground (flash).

Grigori guarding the entrance to the Transfer Cell.

Lying on the ground (remastered).

Henry tackles Grigori from behind.

Grigori bringing Henry to his cell.

Grigori and Ellie are defeated by Henry via The KNEE.

Henry mistakenly holds Grigori after injecting himself with adrenaline.

Grigori performs a takedown on Henry.

Grigori after taking down Henry.

Grigori unamused by Henry making a face to him.

Grigori with a cast on his arm.

Grigori and Dmitri corner Henry and Ellie aboard the docked Toppat Orbital Station.

Members of The Wall, Government and Toppat Clan surround Henry and Ellie.

Grigori and Dmitri being shot by Henry and Ellie.