Not to be confused with Relentless Bounty Hunter, an ending in Infiltrating the Airship.

Master Bounty Hunter is one of sixteen endings in Completing the Mission,

With a group of fellow bounty hunters and support from the Government, Henry sets out to capture or eliminate the Right Hand Man, the new leader of the Toppat Clan.

In a military helicopter piloted by Charles Calvin, Henry arrives on the outskirts of the Toppat Launch Site. He is greeted by a squad of experienced bounty hunters, which include John Pilksin (codename: "Frog"), Gordon Banks (codename: "Eel") and Amelia Esteban (codename: "Turtle").

In a codec conversation with General Hubert Galeforce, Henry and Frog are caught up with the details of their mission-- the Right Hand Man is now the leader of the remainder of the Toppat Clan, which plans to launch a space station into orbit. The Right Hand Man has also received cybernetic augmentations following his defeat to Henry. The squad has to either capture or eliminate him.

Approaching the base, the squad finds a guard named Kayn West at the entrance, armed with an assault rifle and on lookout. Henry can:

With Kayn now on their side, the squad infiltrate the base. Frog places their newest member on guard outside of the base on their behalf. Tapping into their security feed, Eel locates the Right Hand Man in the warehouse and they begin to form a strategy to take him down.

At the warehouse, the Right Hand Man and his adversaries are locked in a battle with Government soldiers already at the scene. They prepare an ambush:[1]

The Right Hand Man notices Henry, but before confronting him, he fires a blast at Frog, Eel, and Turtle, killing them. Claiming that he was going hunt Henry down after getting set up, RHM gives Henry a chance to defend himself.

The damage to the RHM's cybernetics causes him to faint and his cybernetics to shut down. Fellow Toppats on the bridge notice Henry with their leader, causing them to panic.

On the P.A., a soldier, Steven Willis, informs the remaining Toppats that their leader has been captured and urges them to surrender immediately. Without a leader, the Clan folds into turmoil, with many members claiming leadership. Sven Svensson, the pilot of the rocket, attempts to initiate an emergency launch, but is shut down by a fellow Toppat member who did not believe he had the authority to do so.

The power struggle buys the Government enough time to apprehend a wide majority of the Clan. A few Toppats managed to escape as small groups, who pose no real danger to the Government. Charles comments that bounty Hunting may suit Henry, who decides to take the advice.

The correct one for this is Convert.

The correct one is Suppressing Fire.

The correct one is Cheap Fighting Combo.

The correct one is Ocarina, after which the route concludes.

The achievment earned by completing the route 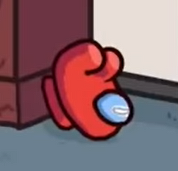 The Red Crewmate near the desk

The achievment icon on Steam

The achievment on Steam