Unknown
Natasha Tadin (Russian: Наташа Тадин) is a minor character appearing in Completing the Mission, who appears only in the "Toppat 4 Life" ending at the Tavern.

Natasha is seen drunk/shy in the beginning of the Toppat 4 Life pathway. Her bio reveals that she has a crush on her friend, Travis DeGroot.

She hangs out with her pal Travis at the tavern every week. Maybe one day she'll get the courage to ask him out. 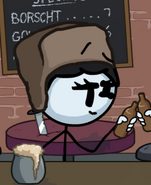