Henry Stickmin Wiki
Register
Don't have an account?
Sign In
Advertisement
in: Antagonists, The Wall Employees, Characters,
and 7 more

Guard at The Wall

Polus Petrovich is a minor character in Fleeing the Complex, who appears only in the "Convict Allies" pathway.

He won sweepstakes and got to name a planet after himself.

Polus is a guard at The Wall. He is briefly seen chasing after (and shooting at) Babushka and Karl the Klown during a massive riot started by Henry Stickmin and Ellie Rose. It is unknown if he survives his encounter with the inmates.

He is a regular stick figure wearing a wall guard cap and has blue colored shoes. 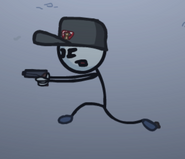