"Complex Waltz"
Presumed Dead is one of the five endings of Fleeing the Complex.

Henry decides to Charge Tackle into the hallway, knocking Grigori Olyat out. Thormund Riloc, a Wall guard on standby, notices Henry running, and picks up his assault rifle to fire on him.

After performing the acrobatics, Henry is left sliding from his cuffs. Friedrich Spielen and Haroldt Cüper, two more Wall guards further down the hallway, also notice him.

The warden, Dmitri Petrov, is notified about Henry's escape. Enraged, he sets the Wall on high alert, with the intention on capturing the loose convict. Henry must find a way to go from here:

Despite being out of the complex, Wall soldiers begin to pursue the rogue truck with armored vehicles. One soldier, Danil Dolche, prepares his shotgun to fire on Henry.

The truck drifts for a moment before losing control and tumbling over, sliding just a bit over the cliff edge. The guards surround the truck, and Dmitri arrives in his personal car. He sarcastically congratulates Henry for being the first to escape the wall, and gives him two options: surrender, or die. Henry checks his own options:

Furious about how the incident played out, Dmitri promises a pay cut to everyone involved. Unbeknownst to him, Henry survived as he gripped on protruding rocks. Dmitri and his soldiers drive back to the complex, while Henry emerges from his hiding spot, now presumed deceased. He walks off into the distance and stows away on a flatbed before applying for a passport. He remains snowy tundra-- now wearing a purple scarf to keep himself warm.[3]

Underlined indicate they only appear in fails in this pathway.

The achievement earned by completing the route.

The achievement earned by completing the route (Legacy). 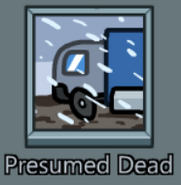