Marcus Bromander, better known as PuffballsUnited, also known simply as Puffballs or Puff, is an American artist, animator, game designer and musician who is best known for creating the action/comedy/parody point-and-click movie-game series Henry Stickmin. He also voiced all the male characters with dialogue, but was able to make each one sound different through different accents and pitch changes. He also composed the majority of the score of the Henry Stickmin series.

Aside from the Henry Stickmin series, Puffballs is also well known for being the co-founder of Innersloth, with their 2018 game Among Us achieving massive success in late 2020. He serves as an artist, animator, and game designer in Innersloth. For Among Us, Puffballs made the maps Polus and The Airship, the latter being an homage to Henry Stickmin.

He plays a lot of games on the side, doing a playthrough of Banjo-Kazooie on Twitch in 2020. He also did a developers commentary on The Henry Stickmin Collection, where he played through the game while showing behind-the-scenes content.

Puffballs was born on September 9, 1990. He became interested in making video games when he was 8, and realized it was possible to make a real game after seeing Alien Hominid on the Gameboy Advance in a store.

After graduating from high school and college, Puffballs attended Oregon State University, where he met ForteBass, and began video game development together after graduation. Puffballs and ForteBass discovered their video game development skills could help each other, with Puffballs' skill game design and artwork complementing ForteBass' computer programming background. After ForteBass left his job at Microsoft, they decided to form a joint venture together. Puffballs and ForteBass founded Innersloth as a privately held company in 2015.

Innersloth released its debut game Dig2China in 2015. It was made available on Google Play and the Apple App Store. In the game, players are able to dig to Asia using an excavator. They can then upgrade their excavator and dig through thirteen layers of the Earth. In-between Dig2China and their next venture, Innersloth experienced multiple failed projects prior to achieving success with their video game development. Some of these failed projects were multiplayer games, which gave the Innersloth team some hesitation with venturing into this medium for their next game. This was followed up by Among Us, first released on June 15, 2018.

Before creating video games, Puffballs created several flash animations in the mid 2000s, including Operation Infiltration and The Bridge. He continued making animations after becoming a video game developer, releasing them on his YouTube channel.

Puffballs created his Newgrounds account on December 14, 2007. Two days later, he submitted his first flash game Crossing the Pit, a game about a stick figure trying to cross a bridge. On Aug 27, 2008, Puffballs submitted Breaking the Bank, which won two awards; Daily 5th Place on August 29 and Frontpaged on April 25, 2009.

After the success of Breaking the Bank, Puffballs released its sequel Escaping the Prison on April 11, 2010. It won three awards; Frontpaged and Daily Feature on April 12, and the Weekly User's Choice on April 14.

On May 27, 2013, Puffballs released Infiltrating the Airship, which introduced the Toppat Clan and fan-favorite characters Charles Calvin and Right Hand Man. The game won four awards, including Daily 4th Place and Frontpage on May 28, and Weekly Users' Choice and the Review Crew Pick on May 29.

On Nov 12, 2015, Puffballs released Fleeing the Complex, the final Henry Stickmin game released on Newgrounds. Fan favourite character Ellie Rose was introduced, voiced by Reese B. Ellie was the first character voiced by someone other than Puffballs. The game won three awards, including Frontpaged and Daily Feature on November 13, and the Weekly Users' Choice on November 18.

In 2017, Puffballs announced that he was starting work on the series' final game, Completing the Mission, and also announced that it would be available alongside The Henry Stickmin Collection, which also featured remastered versions of all previous entries in the series. This collection was released on Steam on August 7, 2020.

On December 30, 2020, Puffballs released the first part of his developer commentary for The Henry Stickmin Collection, and released the second part on January 1, 2021. During the commentary, he confirmed several character name references and revealed the fan theory about Jacob Rose and Ellie being related was false.

In August 2021, Puffballs and the other members of the Innersloth team endorsed Attacking the Tower, a Henry Stickmin fangame by Strobe Interactive.

In 2018, Puffballs and the other members of Innersloth released Among Us, a murder-mystery game involving players trying to figure out who the impostor is. Puffballs made the Polus map for this game, which came out in 2019. For the first two years of the game's release, Among Us had a small fanbase, and the Innersloth crew planned on releasing a sequel.

In 2020, after the global pandemic of COVID-19 resulted in multiple lockdowns to prevent people from spreading the virus, two games achieved massive success; Fall Guys and Among Us. The popularity of the latter inspired Puffballs and the other Innersloth crew to abandon the sequel, and instead focus on improving the original game.

In 2021, Puffballs made The Airship map for Among Us, which is a direct homage to the Airship owned by the Toppat Clan. The map also features multiple references to the Henry Stickmin series, including Charles' helicopter. Before the map was released, the Innersloth crew released a trailer for it, which featured Puffballs reprising his role as Toppat leader Reginald Copperbottom by voicing a crewmate version of the character, who instructs the crewmates to do tasks and informs them that they have an impostor on the ship.

Puffballs in 2015 (Left) with Videogamedunkey (Right) 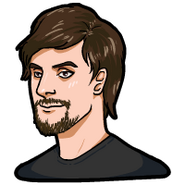 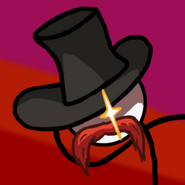