Rapidly Promoted Executive is one of the four different endings to Infiltrating the Airship.

Its auxiliary ending is "Relentless Bounty Hunter", sharing one single pathway up until the final choice screen.

This ending is referenced to again in the "The Betrayed" ending of "Fleeing the Complex".

The pathway is started by Henry Stickmin choosing to go after Reginald Copperbottom with help of the Cannon Ball.

Charles launches Henry inside the Cannon Ball towards the Cockpit of the Airship. When the ball crashes into the cockpit, it completely knocks out Thomas Chestershire and Oldmin with Reginald running away while the Right Hand Man tries to hold Henry off.

Henry enters the warehouse behind the cockpit, as the Right Hand Man raises the alarm. A crane operator, Herb Stokes, loading large pieces of coal sees Henry, and prepares to crush him with the coal.

Henry continues the chase on foot down a hallway. Reginald tries to lose him by remotely shutting down the doors.

Henry goes so fast however he breaks through a walkway and falls to the brig below, to the shock of Dave Panpa, while above him Reginald tries without success to open a door. Henry has to get back up to him.

Reginald opens the door just in time and the chase continues. In the next room, the Right Hand Man catches up to them again and Henry has to fight him. There are two options. Both activate a minigame with four options on its own:

Henry, after killing the Right Hand Man, walks into a room with a massive gap in front of him (how Reginald crossed this gap is not shown).

Reginald runs into the cargo hold of the airship, but Henry tackles him, holding him by his necklace. With the Government helicopter outside, Henry opens the bay doors in preparation to hand him over to the Government, but Reg informs Henry that since he had defeated the him, the airship is now his. Captain Galeforce calls out to Henry from the helicopter, urging him to get Reginald to their hands and complete the mission.

Now Henry has to choose between taking the offer, or continuing his mission. There are four choices, two for each path Henry can take from here.

See Relentless Bounty Hunter for if Henry does not accept the offer.

If Henry decides to accept the offer, he can use:

Thinking that the two men jumped from the Airship, Charles and Galeforce pilot the helicopter to the ground and inspect the scene. Charles is concerned about the fact that the two had jumped from a high altitude without anything to break their fall, but Galeforce assures him that Henry likely had a method to evade the fall damage.

However, the two Government personnel discover that Henry and Reginald had thrown dummies to lure them away from the airship. Realizing that they had been double-crossed, Galeforce screams at Henry in rage.

Back at the Airship, Reginald lends Henry his upper top hat, decorated with his necklace-- officially transferring leadership of the clan to the newcomer. During his tenure as leader of the Toppat Clan, Henry is shown leading meetings, embarking on more criminal heists, and enjoying his time on the high seat. 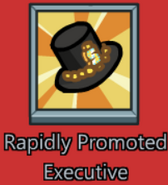 CtM Icon in the Endings Hub Screen
Add a photo to this gallery
Retrieved from "https://henrystickmin.fandom.com/wiki/Rapidly_Promoted_Executive?oldid=189666"
Community content is available under CC-BY-SA unless otherwise noted.