View source
If you were looking for the article about the ending in Completing the Mission, then see Master Bounty Hunter.

Relentless Bounty Hunter is one of the four different endings to Infiltrating the Airship.

Its auxiliary ending is "Rapidly Promoted Executive", sharing one single pathway up until the final choice scenario.

The pathway is kicked off by Henry Stickmin choosing to go after Reginald Copperbottom with help of the Cannon Ball.

Charles launches Henry inside the Cannon Ball towards the Cockpit of the Airship. When the ball crashes into the cockpit, it completely knocks out Thomas Chestershire and Oldmin with Reginald running away while the Right Hand Man tries to hold Henry off.

Henry enters the warehouse behind the cockpit, as the Right Hand Man raises the alarm. A crane operator, Herb Stokes, loading large pieces of coal sees Henry, and prepares to crush him with the coal.

Henry continues the chase on foot down a hallway. Reginald tries to lose him by remotely shutting down the doors.[1]

Henry goes so fast however he breaks through a walkway and falls to the brig below, to the shock of Dave Panpa, while above him Reginald tries without success to open a door. Henry has to get back up to him.

Reginald opens the door just in time and the chase continues. In the next room, the Right Hand Man catches up to them again and Henry has to fight him. There are two options. Both activate a minigame with four options on its own:

Option 1: Dirk - This Opens up a Final Fantasy-style screen. Henry has 495 health. From here, there are 4 available options.

Option 2: Yo-Yo - This opens up an Earthbound-style game screen. Henry has 495 health and 98 PP. From here, there's also 4 available options.

Henry, after killing the Right Hand Man, walks into a room with a massive gap in front of him (how Reginald crossed this gap is not shown).

Finally, Henry captures Reginald in the cargo bay. He opens the bay doors to bring his captive to the waiting helicopter. However Reginald, impressed by Henry's achievement, surrenders the airship and leadership of the clan to Henry.

Now Henry has to choose between taking the offer, or continuing his mission. There are four choices, two for each path Henry can take from here.

See Rapidly Promoted Executive for if Henry accepts the offer.

If Henry does not accept the offer, his options are:

Henry turns in Reginald to the military, and Charles provides him with a pardon document signed by president Jefferson Smithsonian. The game ends with Henry driving off into the desert with his tank.[3]

The achievement earned by completing the route

The achievement earned by completing the route (Legacy) 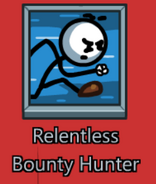