Rope is an option in Escaping the Prison and in Completing the Mission.

Henry uses a rope launcher to get off the roof of the West Mesa Penitentiary. Once fired to the ground below, the rope forms a zipline. Henry slides across it with his hands, but the friction burns his hands, so he is forced to let go. When he falls off, he is full of wounds and bruises, but alive. He stands in the middle of the road, and an Armored Truck runs him over, leading to a fail.

Fail Screen.
Add a photo to this gallery

In the Pardoned Pals/Toppat Recruits pathway, Henry and Ellie can combine the rope with another object in an attempt to escape from the parking lot where they are cornered by The Wall soldiers and Toppat Clan members.

In the Toppat 4 Life pathway, Henry fires a rope onto the cliff face in order to scale it. However, the rope acts erratic moving up and down, before launching Henry away from the cliff, which results in a fail.

"What... was the plan there exactly?" (Completing The Mission during Pardoned Pals/Toppat Recruits route)

"Psh! I could've made that." (Completing The Mission during Toppat 4 Life route.) 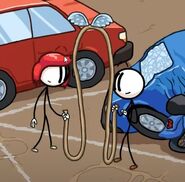 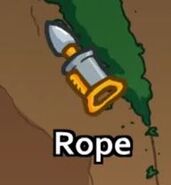 Rope in CtM during the Toppat 4 Life pathway. 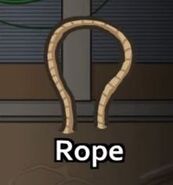 Rope in CtM during the PP and TR pathways.
Add a photo to this gallery
Retrieved from "https://henrystickmin.fandom.com/wiki/Rope?oldid=188328"
Community content is available under CC-BY-SA unless otherwise noted.