Sledge MacRush is a member of the Toppat Clan and a minor character from Infiltrating the Airship.

MacRush wears a torn black top hat with blue shoes and carries a sledgehammer with a brown handle. However in the remakes, his sledgehammer has a yellow/black handle instead.

MacRush appears alongside other Toppat Elites during the intro when Captain Hubert Galeforce informs Henry about the Toppats.

He is also briefly seen in the "Pure Blooded Thief" pathway after the Airship crashes in the desert and a fight breaks out between the Military and the Toppats. He is seen attacking a soldier named Nate Box to which he then proceeds to beat him to death though he kills Nate off-screen.

MacRush in the Old ItA Intro

MacRush in the Remastered ItA Intro 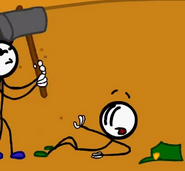 About to beat him to death (Legacy) 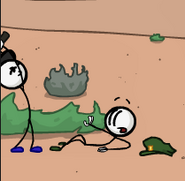 About to beat him to death

His Hammer In Among Us
Community content is available under CC-BY-SA unless otherwise noted.
Advertisement