Sven Svensson is a major antagonist in the Henry Stickmin Series who appears as one of the two secondary antagonists of Completing the Mission alongside the Right Hand Man.

He is a high-ranking member of the Toppat Clan, most likely the third most important figure in Clan, and is also the pilot for the Orbital Station.

Sven appears as the main antagonist of Special BROvert Ops, Triple Threat and Valiant Hero, and the central antagonist of Master Bounty Hunter while also making a cameo appearance in Toppat Recruits and Toppat 4 Life.

In all pathways where both Reginald Copperbottom and the previously mentioned Right Hand Man have been arrested (GSPI), Sven is the new leader of the last remaining division of the Toppat Clan, overseeing their plan to launch the Toppat Orbital Station finding it through files of plans by the old leaders as said in Special BROvert Ops. In pathways where only Reginald was arrested (RBH), he is presumably the second in command of the Right Hand Man, who now leads the clan.

Sven is absent in all paths that don't use Government Supported Private Investigator as an ItA ending (excluding MBH, T4L, and TR), but is still an important member due to being next in line for leadership after the Right Hand Man, and is shown in the luxury escape pod with the other elite Toppats.

Sven sports blue boots and a blue top hat, he is believed to be Swedish because he has a specific accent and a Swedish name. He also has short blonde hair. The only weapon that he uses is a pistol.

In all Government Supported Private Investigator paths (where he's the leader), he is most likely very irritated and tired, but this is only shown in the Special BROvert Ops path, where he explains all his frustration in a long monologue to Henry. He also remarks he won't hesitate to leave anyone behind if the rocket launches without them. This implies that Sven is either not confident or does not have the actual capacity as a leader. This same trait is shown in the wrench fail, where as soon as Henry accidentally gets the engine ready he decides to take off. Despite this, he tries to put a friendly and welcoming personality, as he remarks in Cleaned 'em Out that today (the day of the launch) was the big day and welcomed the Toppats aboard, before realizing everything in the storage had disappeared, due to Henry stealing everything. After this, his welcoming attitude changed entirely as he was hinted to have irritation in his voice that yet another of his jobs became even more difficult.

Physically, he appears to be fairly weak, as he is easily knocked out by Henry (who's not even known to be a capable hand-to-hand fighter) in just one punch (although this might be because he once again wasted time provoking Henry to fight instead of just damaging him) during the Special BROvert Ops path. In Triple Threat, he is easily subdued by Henry and Ellie without any prompts.

He is shown to be a quite talkative and rambling person, as in Special BROvert Ops, he airs his grievances and frustration out to Henry instead of taking revenge, although Henry is directly at his mercy, Sven has a gun, and he knows of the part Henry played in eliminating the previous leaders. Even when his gun gets blasted by the horn, he wastes time provoking Henry to spar, although Henry takes this opportunity to immediately knock him out, and deliver him to custody, shutting down the entire clan.

He holds a luxury spot in the Toppat Clan, despite the fact that other members don't respect him to the extent of Reginald and especially the Right Hand Man. He also shows little humor and takes his role seriously, although if presented with no conflict or he is in the process of reacting, he displays a blank and staring personality (he stares at Henry for a few seconds before turning the gun on him in Valiant Hero, as opposed to directly disposing of him). In Toppat 4 Life, where Henry isn't an enemy of the Clan (but rather a leader they presumed dead), he just blankly stares at Henry at watches the events unfold, as opposed to showing emotions like the other clan members. However, in that same ending, Reginald also appeals to him when he mentions the future will be bright for the clan as Henry as the leader, showing he does respect his position. However, it is unknown whether Reginald was looking at Sven directly, and even if it is, there are no interactions between the two to suggest their relationship.

Unlike the other Toppat members, Sven is mindful. During the ending Master Bounty Hunter, he is the only Toppat member to realize the government raid and not be absorbed in trying to be the new leader, although ironically his call to escape gets shut down because he is second in command and not the leader.

Sven has a leading role in multiple pathways. In most of his appearances, he is either the current leader of the Toppat Clan, or the second-in-command of the Right Hand Man.

He only appears at the end, welcoming Toppats for the day of their launch before being confused by the empty cargo hold. What happened to him, and the rest of the remaining Toppat Clan are left completely ambiguous.

First, he uses the announcement system to say that the rocket is launching soon, warning that he will not hesitate to leave any remaining Toppat members behind. Once Henry enters the Cockpit, Sven will initially ask Henry if the engine is fixed, under the assumption that he was one of the Toppat members sent to fix the engine. However, he quickly holds Henry at gunpoint after recognizing him as the clan's nemesis. He eventually spirals into a tirade about begrudgingly taking leadership in their absence. Henry asks Charles to play a horn, which forces Sven to drop his weapon in terror. Henry then defeats Sven and locks all the gates on the rocket, allowing the government to take everyone - including Sven - into custody.

If Charles beams Henry in the cockpit of Orbital Station, Sven will see him, and after a short awkward pause, he will hold Henry at gunpoint. If Charles attempts to drop Henry off at the space station, Burt tells Sven that he detected a government ship approaching, with Sven responding "Okay? So blow them up already". Afterwards, a storm of laser beams destroys Charles's spaceship. He also appears in the luxury escape pod along with other elite Toppats if Henry and Charles pick that, resulting in him and the other elites pointing their firearms at them. He presumably survives along with numerous Toppats, but their ultimate fate is left unknown.

When Henry rewires the Right Hand Man to be on his side , Sven is confronted by the two. However, Sven is able to remind his boss about his true allegiance, causing the real Right Hand Man to emerge and throw Henry off the launching rocket leading to a fail.

During the ending, Sven attempts to initiate an emergency launch as a response to the Government's capture of their leader but is shut down by a fellow Toppat who didn't believe he was truly in charge (despite the fact that he would be the next in line if Reginald and Right Hand Man are both unavailable). It is assumed that the delay allowed the government to capture and arrest him.

Sven uses the announcement system to say that the rocket is launching soon, warning that he won't hesitate to leave any remaining Toppat members behind. Then, during Henry's Plan, he and Ellie enter the cockpit, defeat Sven and redirect the rocket at The Wall before they leave and enter Charles' chopper, leaving all the Toppats' fate at the mercy of Dmitri.

Sven is one of the Toppats appearing after Henry disrupts the government raid and approaches them in a tank at the Toppat Launch Site.

During the ending, he can be seen attending to Henry and Ellie's recruitment ceremony. Later at the ending screen, he appears again next to The Leprechaun.

"Ok everyone, today's the day!"

Sven reacts to a Toppat saying "Who put you in charge!"

Sven Svensson portrait in Hall, with Mr. Skyscraper looking at it

Sven knocked out by Henry

Sven unexpectedly sees Henry at the top of the Orbital Station

Sven proceeds to point his gun at Henry

Sven in the Luxury Escape Pod

Sven with his trademark pistol in the fail screen

Sven in "Toppat Recruits" during the credits

Sven Svensson at the end of Toppat Recruits

Sven Svensson at the end of Toppat 4 Life 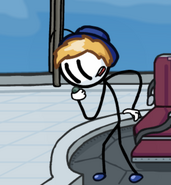 "Is anyone there? We need to take off immediately."

"And now you're here to bring down the rest of us?" 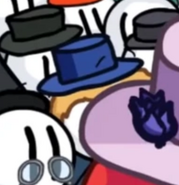 Sven in the Recruitment Ceremony at the end of Toppat Recruits

His Among Us counterpart
Community content is available under CC-BY-SA unless otherwise noted.
Advertisement