National Museum of History and Culture

Along with Winston Davis, he is seen riding in the money transfer truck when they spotted the bag where Henry hid in, in the latter's attempt to sneak himself into the bank. Ted then said how did they lose one money bag, with Winston telling to put the bag to be safer. Ted saw Winston putting the money bag into the Truck, making him the second witness for the case. However, unlike Winston, he wasn't involved with the trial. This is most likely because it was Winston who suggested to put the bag in the truck in the first place.

In the legacy version of Escaping the Prison, Ted makes a quick cameo during the Rope fail. When Henry gets hit by the truck, you can see Ted inside driving it for a frame. Ted also makes another cameo at the end of the legacy version of Lawyered Up where he passes by driving the truck with Henry quickly chasing after it. It is possible that he is driving the armored truck although the windows are practically translucent so it's left ambiguous.

Ted left his job as a bank truck driver and became a night security guard, just like Dave Panpa. During Henry's diamond heist, he is seen conversing to a fellow security guard named Jacob Rose, talking about a certain person's arrest[2] being primary the reason he quit his bank job, because his job as a museum night guard is "safer."

In the "Intruder on a Scooter" route, he is interrupted by Henry with his scooter running with the Tunisian Diamond, remarking "crap."

Ted makes a quick cameo as a picture in the intro, when Captain Galeforce goes over the military scripts and evidence with a page with him reporting about the attempted bank robbery by Henry.

Ted's bio in Breaking the Bank 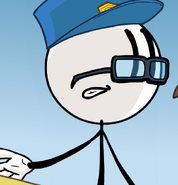 "Huh? How did we lose one?"
Add a photo to this gallery

In EtP (Flash version only)

"Crap."
Add a photo to this gallery

Retrieved from "https://henrystickmin.fandom.com/wiki/Ted_McAdams?oldid=187234"
Community content is available under CC-BY-SA unless otherwise noted.