The Teleporter is a device that Henry uses in all of his games, and it often leads him to fail. The only times it works are in Stealing the Diamond (though through sheer luck) and in Completing the Mission (again, through sheer luck, since he broke the teleporter and it caused him to teleport to a lot of different places before he reached the vault).

The teleporter even appeared in the first PuffballsUnited game, Crossing the Pit, the precursor to the Henry Stickmin Series. It is the only choice to appear in every game.

The Teleporter appears as one of the 8 options in Crossing the Pit and causes the stickman to fall down the pit.

When Henry gets near the bank wall, he activates the Teleporter, only to get teleported into the wall itself, promptly getting stuck until (according to his file photos in Infiltrating the Airship) the chunk of wall Henry was encased in was mined out by authorities.

Fail message: "It's emergent technology. I'm sure it will get better!"

Henry activates the Teleporter and teleports himself to a shooting practice range. Right at that moment, Jonas Noogan opens fire and he shoots Henry by accident (which Jonas Noogan and Captain Roland Canterbury find to their horror) leading to a fail, and a painful injury.

Fail message: "You just can't seem to get the hang of that thing can you?"

During the trial, the Teleporter appears as evidence which Felix White can present, but it leads to a fail, being one of the "joke items" that Felix presents that prove nothing. This results in Henry being declared "Guilty" and sent back to prison.

Fail message: ''What kind of the third-rate lawyer did you hire?''

In the sneaky path, Henry uses the Teleporter and teleports himself to the museum roof. This is the first time that the teleporter actually works for Henry. In the remastered version, it still glitches a bit since it teleports Henry too high, so he makes a rather rough landing, though he can continue so it still counts as a success.

In Pure Blooded Thief, Henry activates the Teleporter device and the screen flashes white during his attempts to use it. After that he ends up in a huge white void where nothing is present (except oxygen, apparently), leading to a fail. The Teleporter also turns off, making it impossible to escape. This is likely a reference to the SpongeBob SquarePants episode SB-129, where Squidward uses a time machine, only to eventually get stuck in Nowhere, an infinite white dimension of almost complete nothingness.

Fail message: "Well I'd better get going. Have fun here by yourself!"

A thing to note is that if the Teleporter is picked, Henry will make a displeased look on his face to the player, as if he is aware that the Teleporter will fail.

Henry uses the Teleporter to try to escape from his prison cell in the International Rescue Operative/The Betrayed routes. He is teleported to a purple planet in the Koprulu Sector from the Starcraft universe, where he appears among a group of Protoss Zealots who are promptly killed by an enemy Protoss Colossus, leading to his own demise.

Fail message: "gg no re", which translates to "Good game, no rematch."

If Henry chooses the Teleporter, he will again make a displeased look on his face, though he looks sad rather than angry, and will not look at the player.

The Teleporter appears in the Jewel Baron route as one of 8 tools Henry can use to cross the gravity chamber in the Toppat Orbital Station. When selected, Henry takes the teleporter, hesitates for a moment, then decides he won't use it again, knowing how unreliable it is. He breaks it by throwing it on the ground. This causes the Teleporter to go haywire, and due to this, Henry is teleported to a number of random locations in quick succession until he finally stops at the very place he wanted to go: the vault with the Norwegian Emerald. This marks the second and final time the Teleporter works. It can also be seen during the end screen for Cleaned 'Em out, in the hands of Funko pop Henry.

All Teleporter Uses - The Henry Stickmin Collection
All outcomes of the teleporter.
Add a photo to this gallery

Teleporter in Completing the Mission 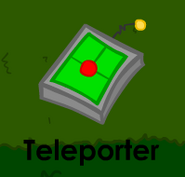 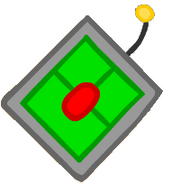 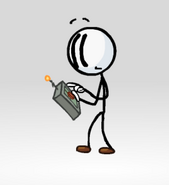 the teleporter is off 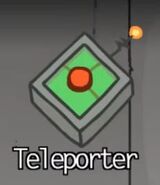 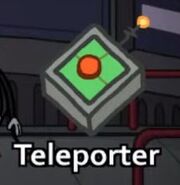 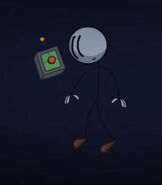 Henry using a teleporter in Stealing the Diamond remastered

Teleporter in Crossing the Pit

Add a photo to this gallery
Retrieved from "https://henrystickmin.fandom.com/wiki/Teleporter?oldid=144436"
Community content is available under CC-BY-SA unless otherwise noted.