The Henry Stickmin Collection includes all six games in the series;

The game features remastered versions of the first five Henry Stickmin games originally released on Stickpage and Newgrounds. A new game, Completing the Mission was developed specifically for the collection, to serve as a final chapter to the story. All games (with the exception of Completing the Mission) were remastered through Adobe Flash specifically for this collection.

The games follow the namesake character and series protagonist Henry Stickmin on his various but very dangerous adventures. First starting off as a thief, he can later become an agent of the Government, the leader of a notorious criminal syndicate, or remain neutral as a thief.

This is a list of plans that were revealed by PuffballsUnited on Newgrounds regarding the Collection, prior to its release.

Players go through a total of six episodes, five of which had previously been standalone games; Prologue (Breaking the Bank), Episode 1 (Escaping the Prison), Episode 2 (Stealing the Diamond), Episode 3 (Infiltrating the Airship), Episode 4 (Fleeing the Complex), and Episode 5 (Completing the Mission).

The game centers on Henry Stickmin, a fictional character that performs various actions depending on the choices the player chooses. Players are given a minimum of two choices; depending on the choice they pick, Henry will either succeed and overcome the situation or scenario or "Fail," in which case the player is presented with a unique animation, usually accompanied by some joke or commentary on the choice made. Players aren't punished for failing a scenario; they are given infinite re-dos while a "total fail count," and a "unique fail count," keep score of how many times they player has "failed" and how many unique fails there are in the episode, encouraging the player to seek out all of the possible fails in the game.

Sometimes, there will be a scenario in which there is more than one choice that is correct. Similarly, there are even rarer occasions where there isn't a correct choice at all.

Because Infiltrating the Airship and Fleeing the Complex both have endings that are dependent on player choice, when starting Completing the Mission, the player must pick one ending each, generating a unique story and perspective for the final episode.

Steam users have given the assemblage package "Overwhelmingly Positive" reviews, with a 98% rating based on 24,000+ reviews. Reviewers have praised the Collection for its humour, animation, production value (specifically in Mission), & storylines, with some praising the sense of nostalgia they experienced while playing the game. Despite the universal praise, some have noted the frequency of frame rate issues and crashes in fullscreen mode, as well as the US$15 price tag on Steam.

Similar to the flash series, several popular YouTubers have played The Henry Stickmin Collection (including Markiplier, DanTDM and Jacksepticeye), which have millions of views respectively. In addition to this, the Distraction Dance was a viral internet meme (the meme being a bait-and-switch meme reminiscent of the Rick Roll and Get Stick Bugged Lol) in August 2020, causing The Henry Stickmin Collection to achieve even more global success.

Completing the Mission, the sixth and final game in the series which is unique to this collection, has been praised by players and reviewers, and is often considered the best game in the series. The death of Charles in Valiant Hero has been well received by both fans and critics. 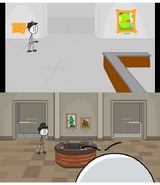 A comparison of the museum in Stealing the Diamond 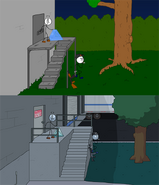 The last area of Unseen Burglar 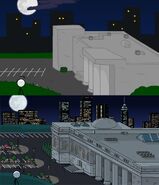 Overview of the museum 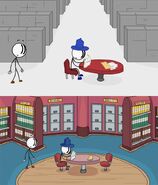 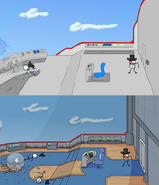 A comparison of the airship's conductor room in Infiltrating the Airship 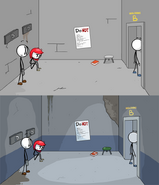 Start cell in Fleeing the Complex 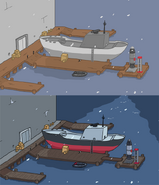 The Henry Stickmin Collection! ALL ENDINGS AND FAILS! Oh boy here we go! (no commentary)