The Leprechaun has short, curly orange hair with a small light Green top hat and some light green shoes.

As stated in his bio, he doesn't seem to mind appearing as a leprechaun as he totally embraces his appearance. He has also adopted a fake Irish accent.

He is seen with Ali Gene and Antonidas Sparta when Henry Stickmin defeats and captures the Right Hand Man, but is then tasked to hand him over to the Government. The three all confront Henry but the outcome of the encounter depends on Henry's choices.

If Henry finishes off Right Hand Man by throwing him which kills him, The Leprechaun will get shocked by Henry's action which in return gets Henry killed. If Henry rewires RHM then he will fly off with him which fools The Leprechaun into thinking that Right Hand Man had captured Henry. If Henry chooses to have a Dance-Off with the three a flying tank swoops in and crushes Henry knocking Antonidas and The Leprechaun back. However Henry does none off this and instead plays an Ocarina which later leads to the three Toppats surrendering know their leader is captured.

He is seen in the Toppat Orbital Station Cafeteria sitting with other Toppat members after Henry Stickmin and Ellie Rose break in through the window. During Diversion, he is one of the first Toppats to catch on and start dancing, performing the Distraction Dance. He is later arrested when the rocket lands at The Wall.

He is can be spotted during the credits with other Toppat members such as Earrings and Henry Stickman who are welcomed onto the Orbital Station by their current leader, Sven Svensson, only for all of them to find out that it is completely empty in the Storage Bay.

The Leprechaun's fate is unknown, but it can be presumed that the Government Raid still happened off-screen. If so, then he was either killed, arrested or alive if the Toppats won.

He can be found on the end screen next to Sven Svensson of the route with other Toppats. His angry expression implies he may not be fond of Ellie and Henry.

He totally embraces his appearance. He's even adopted a terrible fake Irish accent to complete the ensemble.

The Leprechaun in the Orbital Station cafeteria 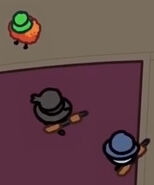 The Leprechaun in "Toppat Recruits" during the end screen

The Leprechaun noticing Henry from far away, warning the others

The Leprechaun along with Ali and Antonidas confronting Henry

Knocked back by the crashed tank

The Leprechaun in "Cleaned 'em Out"

An unconscious Leprechaun lying on the ground in "Valiant Hero"