Thomas Chestershire is a supporting character in the Henry Stickmin Series who appears as a minor antagonist in Infiltrating the Airship, a minor character in Fleeing the Complex, and as a major character in Completing the Mission.

In Infiltrating the Airship, he appears as a minor character in Relentless Bounty Hunter/Rapidly Promoted Executive, and as a minor antagonist in Pure Blooded Thief.

In Completing the Mission, he appears as one of the three deuteragonists in Toppat Civil Warfare, a minor antagonist in Master Bounty Hunter, and a minor character in Toppat 4 Life,Toppat King and "Toppat Recruits.

In "Pure Blooded Thief," he only makes a short appearance during the fight between the Toppats and the Government. Thomas is seen standing behind to Quickdraw and Mr. Brimley on the battlefield. Thomas manages to evacuate the battlefield and survives the war as he makes a cameo appearance in a later path that takes place in the same timeline.

In "Rapidly Promoted Executive"/"Relentless Bounty Hunter," he is standing in the cockpit of the Airship, discussing a clipboard held by Oldmin, when Henry suddenly breaks into the airship using a Cannon Ball, knocking out both Thomas and Oldmin. Thomas can later be seen near Henry's ball without his hat, revealing that he is bald. His glasses are broken.

In that path, he is presumably badly injured, but not killed, as in the same timeline, he later appears in Fleeing the Complex, doing the exact same job.

Thomas makes a cameo in "The Betrayed," where he can be seen on board the Airship. When Henry calls Reginald Copperbottom to request the Toppats help him break out of The Wall, Thomas turns around and looks at him in shock as he is surprised about Henry's whereabouts.

Thomas returns as either an ally or enemy to Henry, depending on the route taken.

His most prominent role is in the "Toppat Civil Warfare" pathway, where he and Geoffrey Plumb are the only Toppats who keep supporting Henry after Reginald turns the rest of the clan against Henry for betraying Ellie Rose and leaving her at The Wall. It is strange because Henry nearly kills him in Infiltrating the Airship. Thomas is locked up in the brig for being loyal to Henry, but Henry frees him later. Along with Henry, Geoffrey, and Dave Panpa, Thomas flees the airship using a escape pod, and joins Henry's faction of the Toppat Clan who start a civil war with Ellie's main faction of the Toppats.

In the "Toppat 4 Life" pathway, he can be spotted once Henry shows up to the Toppat Launch Site and is seen with a few other Toppats happy about the return of Henry as leader and that he has saved the Toppats. Thomas can be later found during the end screen of this route with other key Toppat members.

In the "Toppat King" pathway, he is seen during the credits of the path firmly wielding a pistol while Reginald is doing a monologue.

In the "Toppat Recruits" pathway, he is seen during the credits along with the other Toppat Clan members as they all are attending the recruit ceremony of Henry and Ellie.

In the "Master Bounty Hunter" pathway, he is seen during the credits surrendering along with Wallace Dagwood and an Unknown Toppat as they are getting arrested by Government soldiers, more specifically Calvin and Konrad Bukowski.

Thomas, for the most part, is shown to be a very close and loyal ally to Henry in any pathway where he is part of the Toppat Clan. Chestershire even shows support for Stickmin after he not only knocked him out with his cannonball in Post-RPE paths but stole the Romanian Ruby and caused the Airship to crash which could've killed him in TR. In "Toppat Recruits", Thomas seems to be an ally to Henry as he happily attends his and Ellie's recruit ceremony and is one of the few known Toppats accepting of their presence in the Clan.

In Post "Rapidly Promoted Executive" paths, Thomas becomes one of Henry's most loyal allies as he expresses that Henry is a great leader. This is first shown in "The Betrayed" path where he shows shock in discovering Henry's whereabouts, his bio for FtC even states how he's been upset that Henry has been missing and how he enjoyed Henry's brief period of leadership. Chestershire is also on great terms with Henry in the "Toppat King" and "Toppat 4 Life" paths.

However, Thomas' true loyalty to Henry is proven in "Toppat Civil Warfare" where he and Geoffrey Plumb remain loyal to Henry even when the entirety of the Aiship Division betrays him for his actions in "Ghost Inmate" path, causing he and Geoffrey to be locked inside the brig. Later on, he joins Henry with Dave and Geoffrey, fighting for him against the rest of the Toppats.

The only Post-RPE paths where Thomas is not an ally to Henry is in "Revenged", where he would presumably be against Henry as his main goal is set on destroying the Toppat Clan. Additionally, Thomas is an enemy to Henry in any Post-RBH and Post-GSPI routes. He would also presumably be against him in "Jewel Baron" and "Pardoned Pals" (as well as maybe "Stickmin Space Resort" though that would depend on whether he was on the rocket or not)

Thomas is shown to think somewhat highly of Henry in Post-RPE paths as he enjoys Henry's leadership. In TR Thomas seems to be a mere ally to Henry as he is shown to enjoy his company.

Thomas' relationship with Ellie depends on the path chosen. During the "Toppat Recruits" path, Ellie is an ally of Thomas as he seems to be on good terms with her and happily attends her recruit ceremony. While not shown in "Toppat King", it is most certain than Thomas would be on good terms with Ellie as she is loyal to the Toppats and is Henry's Right Hand Lady.

However, Thomas is an unseen enemy to Ellie and Pardoned Pals and Capital Gains (he wouldn't know who Ellie is in Triple Threat) as she is against the Toppats in those pathways and intends harm against them. In "Toppat Civil Warfare", Thomas is a mortal enemy to her as he sides with the person who ditched her to rot after she helped him escape the wall and this is made clear through the endscreen of the path where Ellie is shown to be an enemy to everybody in Henry's Squad.

While he and Right Hand Man are presumably allies in every other pathway, it is made clear in TCW that they are enemies as the RHM without hesitation commands for someone to send Chestershire to the brig for simply supporting Henry even after most of the Clan see him in a negative light, especially the Right Hand Man. This presumably prompts Thomas' hostility, although the RHM was killed by the escape pod Thomas was in before they could meet again.

Thomas and Geoffrey are both shown to be friends as they are both Toppat Clan members and both seem to continue to support Henry Stickmin as the Clan leader in "Toppat 4 Life" and specifically in "Toppat Civil Warfare" where they both team up alongside Henry and Dave.

Dave and Thomas don't interact, and so very little information is known between them, as they are only allied in Toppat Civil Warfare.

Though their relationship is unknown in all other paths, in "Toppat Civil Warfare" they are both enemies as Winters locks him up in the brig for supporting Henry even after he was exposed as a bad leader by Reginald Copperbottom. Whether Floyd was just following commands from the Right Hand Man or not, it's clear that he and Thomas are enemies in this path not only would Thomas feel betrayed by him but would also join an enemy faction of the Clan. 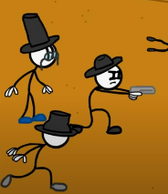 Thomas Chestershire in "Pure Blooded Thief" along with Quickdraw and Mr. Brimley (Legacy) 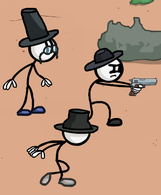 Thomas Chestershire in "Pure Blooded Thief" along with Quickdraw and Mr. Brimley

Chestershire, Quickdraw, and Brimley on the battlefield (Legacy)

Chestershire, Quickdraw, and Brimley on the battlefield 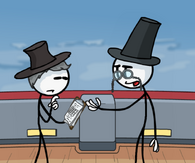 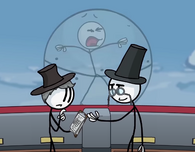 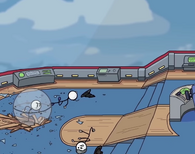 Thomas and Oldmin knocked out cold by Henry's Cannonball

Thomas working in his work area during The Betrayed (Legacy).

Thomas working in his work area during The Betrayed (Remastered).

Thomas later finding out about Henry's whereabouts and turning around, looking at Reginald in complete shock (Legacy).

Thomas later finding out about Henry's whereabouts and turning around, looking at Reginald in complete shock (Remastered).

Surrendering as he gets arrested during Master Bounty Hunter.

Thomas Chestershire in Toppat Civil Warfare during the denouncement ceremony.

Stranded in the desert with his Squad.

Thomas in the end screen of Toppat Civil Warfare. 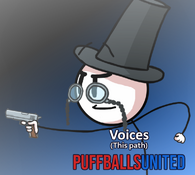 Thomas in the Toppat King credits.

Thomas happy about Henry's return at the end of Toppat 4 Life.

Thomas (far left) in the end screen of Toppat 4 Life.
Community content is available under CC-BY-SA unless otherwise noted.
Advertisement