Infiltrating the Airship, Fleeing the Complex

The Toppat Leader is the main antagonist in Infiltrating the Airship and the The Betrayed ending in Fleeing the Complex.

He wears black gloves, black shoes, and two top hats (possible reference to the Noble Assessment of Hats in TF2), which suggests that he is the highest rank in the clan. He also has a brown mustache and a golden collar necklace with blue diamonds students on it.

He is the leader of the Toppat Clan and is probably the owner of the airship.

He plays a large role in the "Rapidly Promoted Executive/Relentless Bounty Hunter" scenario, in which Henry tries to take him captive.

When Henry gets into the airship with a Cannon Ball, he starts chasing the Toppat Leader through the airship's series of rooms. After Henry defeats the Right Hand Man, the he catches the Toppat Leader in the ship's cargo bay and tries to arrest him. The leader, in a last-ditch effort to not get arrested, surrenders the airship to him. Henry has to decide if he is going to arrest him, or accept the offer and become the new Toppat leader.

He is also in the "Pure Blooded Thief" scenario of the game, in which he stops the Right Hand Man from killing Henry, who stole the Toppats' red ruby. He ordered a full retreat as the Toppats were outnumbered by the military and direct assault would be futile.

Finally, he briefly appears during the credits of the "Government Supported Private Investigator" scenario, where his arrest is shown on Henry's TV.

"Yes, hello? Henry? Where are you? Eh? In the complex, called "The Wall?" Oh yes of course so, we'll, uhh, we'll be right there. Sit tight and I'll let you know when we're close."

Upon escaping his prison cell, Henry calls upon the Toppat Clan to help him escape. The Toppat Leader answers and comes to his aid in his airship. The leader sends some of the clan's members to distract the guards in the cafeteria, so Henry can escape. He tries using his old scooter to try to reach the airship, but when it seems like he will not make it, the Toppat Leader grabs his hand, and his true intentions are revealed. He intends to retake the Toppat Clan from him; he has no intention of rescuing Henry. He says:

"See, without you, I become the leader of Toppat Clan again. I just wanted to look you in the eyes, as I took it all back. Goodbye."

He then bids Henry farewell, lets go of his arm, and watches Henry fall to his death, earning the rank The Betrayed. 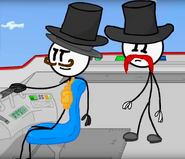 Runs away from Henry

In the Crane Room 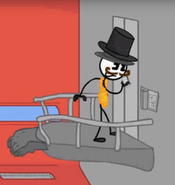 Trying to open security door with Henry in pursuit

In the Cargo Bay

Gives up his title to Henry 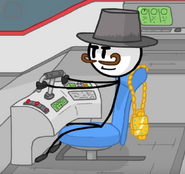 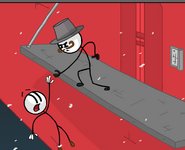 Tired because of Henry's chasing

At a loss (Warp Zone)

At a loss (Techno Trousers)

Being held by Henry

Being dropped by Henry

Falling to the ground

On art by Puffballs United
Add a photo to this gallery
Retrieved from "https://henrystickmin.fandom.com/wiki/Toppat_Leader?oldid=17543"
Community content is available under CC-BY-SA unless otherwise noted.