The Toppat Orbital Station is a gigantic space station owned by the Toppat Clan. It is featured in all pathways (except for "Toppat Civil Warfare") of Completing the Mission.

It is a long white rocket with several windows and pillars at the top. The cockpit is located at the very top of the station (seen as a tiny stub from the outside). It has 16 solar panels. A grey joint in the center of the station between the solar panels with 2 circular rings that rotate once in orbit, as well as the Orion Lounge window that closes and opens. At the bottom of the hull is a grey half-circle that hides the Supreme Dominance laser, seen only in the "Jewel Baron" pathway.

Depending on which pathway the player chooses, the Orbital Station is either still at the Toppat Launch Site ready to launch (with Henry having to either prevent that launch, or help to make it happen), or it is already in orbit above Earth. The only paths in which the Orbital Station is already in orbit are Free Man, Jewel Baron, and Valiant Hero, however depending on Henry's status he has a different mission with it. Either escaping from it, stealing something from it, or taking it down.

The Orbital Station is large enough to house the entire Toppat Clan and all their resources. It is powered by solar panels and has artificial gravity.

It is launched from the Toppat Launch Site with help of three rocket engines, that detach after launch. Before launch, it was loaded with all resources brought in by the Toppat Train. To give an impression of the stations' size; the walkway leading from the launch site to the rocket was so long a car was needed to cross it.

The Orbital Station has multiple weapons, defenses and subsidiaries such as:

The Cafeteria is a large central room in the orbital station. It has a nice view of space. The Cafeteria is one of the most common places where fails happen, because so many Toppats are in it.

Another relaxation area. It has several tables to sit at, and a pool table. It seems to be directly connected to the vault. The window can be seen from the outside of the station in between the solar panels if it is open.

Where the station's artificial gravity is generated. For some reason, it contains a huge gap that Henry has to try and cross in the "Jewel Baron" pathway. It's a reference to Crossing the Pit.

The Toppats store their valuables here inside multiple cells, locked and suspended behind a transparent panel each. It is possible to retrieve something by simply opening the gate, or eject it into space.

There are multiple armories on board the station, where the Toppats store their weapons. Members are supposed to lock the doors when leaving an armory, but frequently forget to do so, as seen in "Free Man." The armories contains mostly assault rifles but also special weapons such as the Big Sword, the Underbarrel Grenade Launcher and the Pew Pew Gun.

There are at least 14 cells on board for detaining prisoners. The prisoner can be suspended from the ceiling with handcuffs, and at the push of a button get ejected off the station and into space.

The dome on top of the station contains a large portrait gallery with paintings of former Toppat Leaders and other prominent members.

Seen in "Toppat Recruits"[1], the Medbay is a white room with various beds, reserved for the injured members.

The storage room is where most of the Toppat Clan's assets are stored in the station.

The station has several Escape Pods. Most are small spherical capsules with seats along the sides and controls at the back, capable of holding 2 people. More may fit in, probably up to 4, but it will be extremely cramped.

The Engine Room is a room with what is presumed to be an internal combustion engine used to generate electricity for the station and other structures near the launch pad. When the station gets into orbit, the solar panels replace its role.

The Hallways of the ship are ways crew members can get from one place to another. All of the areas in the ship are accessible from them.

The Core of the orbital station is a large room with a cylindrical tower and multiple catwalks leading to the sides of it. It satisfies all power demands, although it is also quite fragile. The only way to get in and out is going through a keycard blocked metal door. Whatever inside the core is never seen, though judging from the space station's destruction in Valiant Hero, it can be presumed as a nuclear reactor or equivalent.

Quotes heard from the Rocket

One side of the Vault.

Supreme Dominance being reflected by the gigantic Emerald

The entrance to the cockpit, alongside more four portraits

Ellie in the Medbay 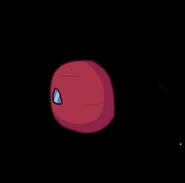 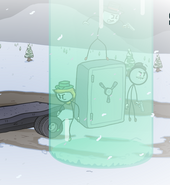 The station beaming up Toppats.

Storage room (lights on, before launch).

the storage's stairway to the engine room

Aftermath of the reflected laser

Burt in the Communication room 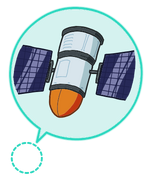 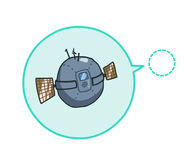 Breach in the wall (shown here with Henry and Ellie surrounded by The Wall, Government and Toppat Clan.

The station about to crash.

GIF of the Orbital Station exploding and destroying the Launch Site.

After being redirected to The Wall.

Rocket exploding upon impact with the launch site's buildings

HazMatt in a regular Escape Pod

The Rocket being hijacked
Community content is available under CC-BY-SA unless otherwise noted.
Advertisement