Hello! I'm an Henry Stickmin (and Henry Stickman) fan who helped a bit on this wiki, with categories, images and content!.

I'm always open for questions on Discord too (on the server, don't send a direct friend request please). There is my page:

Lately, I've also been able to get my hands on a flash decompiler. This means I'm able to get several files of the game, mostly characters, options and more! I put the transparent images on galleries to make the page look better, or replace the ones that are edited.

Fun Stuff I found on the Files:

These bios went unused in the game, and appeared between the Pardoned Pals/Toppat Recruits bios. They're liekly belonging to Kev Portly and Ryan Goldman. What's your opinion? Tell me!

I found this crystal that was going to appear on the files. What crystal is that? Is that a reference? You can talk about it on my Talk Page!

Found the files of these two characters. Normally, the window in-game would make their hat colors hard to see, but now we know the truth!

I found the Toppat from the Parasol fail. I think it's Barry Bruh. What's your opinions? Tell me! 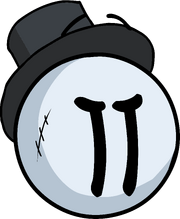 The Sein Seinfeld background from the TV Broadcast fail.

and, that's it for now. I'll add here if I find something worth mentionating!

Favorite endings from each game

FtC: Convict Allies, Presumed Dead (I like the dock part in GI tho)

StD: Intruder on a Scooter

Several minor characters on the

Community content is available under CC-BY-SA unless otherwise noted.

Ranked #7
on this wiki