West Mesa Penitentiary, otherwise known as Red Mesa Penitentiary or simply The Prison, is a tall building, located in the Desert, where Henry was incarcerated after getting caught in an attempt to break into a Bank nearby.

According to their mission statement, their core values are simply to be vigilant and shoot to kill. Further details are listed below:

The building is 32-33 floors high, with gray walls. Henry's cell is located on the 17th floor, as can be seen during the Jetpack fail. There are more than 100 cell rooms, with windows. There are also a lot of offices, meeting rooms and prison wings. There is also an elevator and stairs to the ground floor. In front of the building there's a police car belonging to Rupert Price[1] (which Henry steals in the Badass Bust Out ending), and when you walk in you can see security room and a billboard with some notes, and an employee of the month picture hanging from the wall.

The building and security plan is led by Captain Ed Roberts, who carries an AR-15 (AK-47 in the Original). The rest of workers there are higher ups such as Captain Roland Canterbury, Captain Geoffrey Custard, and Casual Policemen. Dave Panpa and Rupert Price are on Henry Stickmin's cell on the same floor where Harold Ronson the repairman was fixing the pipes. A lot of other staff can be seen when Henry ends on a police meeting or when he uses the Opacitator or NrG Drink.

The only other seen prisoner besides Henry is Blade McGee but there is definitely a lot more. Henry was locked up in the prison for around 33 days, according to the scratches on the walls he created.

The Building is also briefly seen in Fleeing the Complex when picking the Warp Star option during the "Presumed Dead" ending. The star allows Henry to escape from the truck he is in but ends up sending him crashing back into West Mesa Penitentiary. The fail screen says "This place seems familiar".

The prison appears again in the "Multiverse Correction" secret ending, where it is shown that the Center for Chaos Containment sent Henry Stickmin the Cake as part of fixing an anomaly in the multiverse. Dave Panpa picks the box up and Rupert Price wants him to bring that box, and so it is how the entire series starts.

Henry in his Cell

Henry in his cell

Former Lounge with Armory (Replaced by an Office in Remastered) 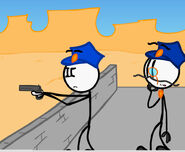 Retrieved from "https://henrystickmin.fandom.com/wiki/West_Mesa_Penitentiary?oldid=190906"
Community content is available under CC-BY-SA unless otherwise noted.