In Breaking the Bank, he appears as a major character in "The Story Begins" and the one who suggested throwing the bag Henry Stickmin was in to the back of the truck. In Escaping the Prison, he appears as the secondary antagonist of "Lawyered Up" and an unseen character in every other route.

In Infiltrating the Airship, he appears as a minor antagonist in the "Government Supported Private Investigator" ending.

He has a big brown mustache with a hat (usually having a blue bank security hat with a gold badge on it). The color of his shoes is not shown, however, in the Legacy version of Infiltrating the Airship, he is shown wearing a basic grey top hat.

In the remastered version of Infiltrating the Airship, he wears a blue top hat with a gold badge that has an S on it, referencing his previous hats.

Winston was riding in the money transfer truck throughout the desert with Ted McAdams while Henry was hiding inside a money bag. Being none the wiser, Winston and Ted decided to load the bag, perceiving it as lost bank cash. Afterwards, the truck arrives at the bank and Henry is thrown inside the vault.

During the trial, Winston had to come as a witness because he was the guy who convinced Ted to put Henry's bag in the truck during Henry's attempt to break into the bank. He told the judge everything that happened that day with all the details, telling about him not knowing the person that was in the money bag, him and his partner spotting the bag and telling Ted to throw the bag, just to be safe.

Felix White (Henry's lawyer), however, refuses to believe this, as the knot was tied from the outside, supposedly impossible for Henry. White concluded that Winston had attempted to kidnap Henry, threw him inside the bag, battered him, tied it, then used his position as a truck driver to dispose Henry inside the vault; and when Henry survived, Winston attempted to frame him for robbery.

Winston responds with "You guys can't... He can't... This... THIS CAN'T BE HAPPENING TO MEEEEEEEEEEEEEE!!!!!!" before being arrested and sent to prison for 'kidnapping, assault and fraud' (as showed in the military files on Infiltrating the Airship) while Henry became a free man.

PuffballsUnited confirmed, however, that Winston still had a trial in all other endings, and he was framed for nonexistent crimes.

In the GSPI pathway, when Henry walks in on a meeting with Toppat Clan members, one can be revealed as Winston Davis sitting in a chair. When Henry disguises himself (Disguise choice), Winston almost recognizes Henry, as knowing him before. However, he decides to drop his suspicion after Henry enters in an escape pod (after Slice's quotes). When the Toppats ask him about his opinion about putting a solid gold cannon on the airship (Glue choice), he responds with "Well, I'm still kinda new here so I'm not really sure what to say".

As the airship division's members were arrested, Winston Davis was also presumably incarcerated.

Winston looking at the Disguising Bag 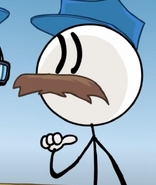 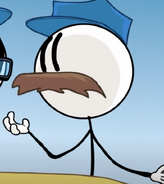 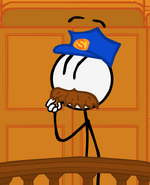 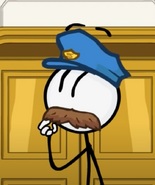 Winston as seen in the meeting (legacy)

Winston as seen in the meeting (remastered) 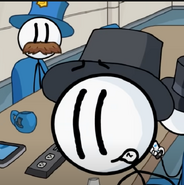 Winston Davis' picture in the intro of ItA remaster

Winston Davis' picture in the intro of ItA legacy
Community content is available under CC-BY-SA unless otherwise noted.
Advertisement